An Informal Overview of Series 8

I wrote this post for my main blog, and then never published it. If it proves anything at all, it proves that the series is always in flux, always facing the second-guessing of the audience, always pleasing some and failing to please others -- and that it has always survived these things, these things and more. With the show about to enter its most divisive and controversial season since the early '60s, that's something to keep in mind. 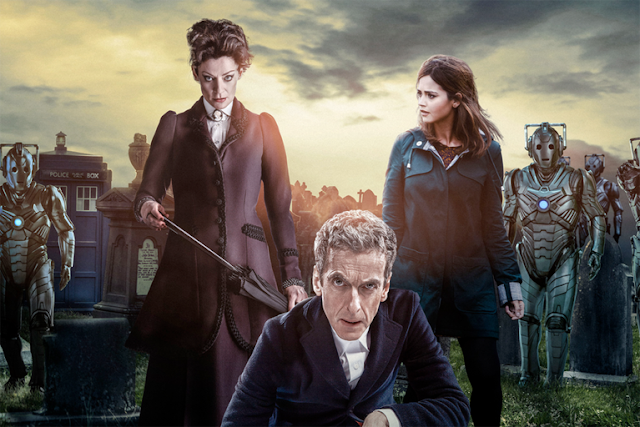 I’ve been neglecting the blog for a while now, but don’t think I haven’t been busy, although in different areas. Writing has taken a back seat to design, with the results to be seen at my brand-new dot com address, www.tarotbyducksoup.com . There’s a lot to see there right now, and more coming soon as Spring unfolds. If you like that sort of thing (and it seems that lots of people do, although some are reluctant to admit it), why not hop over there right now and take a gander — or even a duck.

Some might say I’ve been neglectful (or at least slow as molasses) on the pop-cultural front as well — I’ve only just finished, as of last night, watching Series 8 of the the revived Doctor Who.

It was a problematic season for me, and in a way I’m glad that I split it into two halves, although I did it out of spite. Six episodes into the fall run I was feeling terribly fed-up and frustrated by the thing, and could no longer justify paying DirecTV $68 a month just for Doctor Who, especially when I knew very damn well that I would be buying the whole series on DVD for less than one month’s satellite cost. The problem, as I saw it then, was that head writer Stephen Moffatt had shifted the emphasis of the show too much onto the companion, making incoming Doctor Peter Capaldi a supporting player on his own show and turning Doctor Who into The Jenna Coleman Show. Even now, I don’t think I was wrong; but Moffat’s ambitious plan for the season culminated in a deep and emotional two-part series finale that at least justifies what came before, while beginning to shift the emphasis back where it belongs.

The Companion can be a tough balancing act. You don’t want them to be a cypher, a plot tool — just someone to get into trouble or to ask The Doctor Pointed Questions so that he can explain the plot. You want them to have a personality and a story of their own. But you don’t want to go too far in that direction, to the point where the Companion takes over the show; and you especially don’t want to do that in a season where you’ve got a new Doctor just coming in to establish himself.

So, I still think that large swaths of this season were ill-advised, and a lot of my earlier criticisms (that Danny Pink was a 100 percent contrived character, created strictly to be killed off, and that Clara’s professed “love” for this character was artificial and unconvincing at best) are legitimate. But with the season now completed and Moffat’s “Master” Plan played out, one begins to understand his reasoning and forgive a little. His gambit for series eight would have been better off saved for next season, with Capaldi established, but we can’t change it now. All we can do is enjoy the season’s highlights, especially including the finale, and try not to think about its worst moments, especially including the lamentable “Caretaker” episode, which all by itself caused me to pull the plug on my TV provider!

Peter Capaldi was born to play The Doctor. He brings authority and love to the part; and if Matt Smith’s youthful exuberance is gone, that’s as it should be and part of the great contrast. Capaldi’s Doctor has taken more emotional hits, and feels the weight of them; still his delight in discovery and his rebellious nature comes shining through in radiant doses. One senses that his is the definitive Doctor for the revived series, even if we don’t (and we shouldn’t) lose our affection for his predecessors. It’s my great hope that Capaldi will stick with the character for some time to come, and my great fear that he won’t.

Meanwhile — regenerating The Master into a female form was a ballsy move, one that adds a little discomfort to the part; and yet I can imagine no one playing the character to greater perfection than Michelle Gomez. Certainly she has got the spirit of the part nailed down much more accurately than the really exceedingly annoying John Simm ever did: and dressing her up as an Evil Mary Poppins is a sly stroke of genius. I’m very, very glad to learn that she will be back in series nine.

So, in summing up: a problematic but ultimately enjoyable first season for Capaldi, with all the problems centered around Jenna Coleman’s character. Throwing Clara into the Doctor’s time stream was one of Moffat’s more brilliant ideas in series seven, although one that came with issues that were obvious even at the time. Those issues played out all through series eight, to its detriment. The series finale and then the excellent Christmas special came along and mended up some of those issues; let’s hope that trend continues in series 9. Let’s hope especially that Moffatt finally settles Clara Oswald back into the supporting role, where she belongs, and allows Capaldi to shine in all his mastery and finesse.