The Original Series -- Accessible At Last 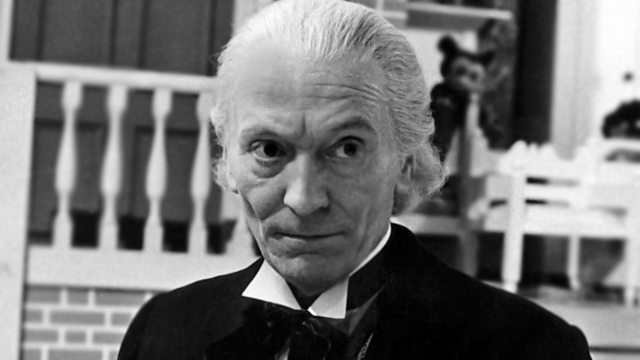 I now have in my Movie & TV library, in one form or another, every episode of the British television series Doctor Who, in its original format. I don’t mean just the hugely popular revived series, going on nine seasons now — no, I was a fan of Doctor Who before it became fashionable. I mean the whole shebang, including the original half-hour series that ran from 1963 through 1989, 813 episodes in all.

For the better part of two weeks, my computer worked 24/7 pulling it down, season by season, from the torrenty dark area of the interwebs. They’re out there, and they are not hard to find if you look in the right places. The season “sets” even include fan-made reconstructions of the missing episodes that were famously and stupidly burned by the BBC pre-1975.

I do not feel guilty about getting the bulk of the series free in this way, because when it comes to Doctor Who, I gave at the office. The Beeb has always treated Who as a Cash Cow to be milked dry; on Home Video they have limited the releases (excepting only two seasons) to the individual stories, four to six episode blocks, at a minimum of $20 a pop. Vast swaths of Who can’t be bought at all, and the parts of it that can will put your credit card into the Intensive Care Unit.

My first exposure to the original series happened back in the mid-eighties, when local PBS stations began to air Who in the form of edited compilations, so-called “movie versions” that presented the stories in a way they were never meant to be shown.

You really had to be a fan to appreciate the show in that butchered format. These god-awful “movie versions” were never less than 90 minutes long; some ran in excess of two and a half hours. This had the effect of inflating all of the programme’s shortcomings to a gigantic scale. The cheap effects, the wobbly sets, the sometimes dodgy acting by the guest cast, and worst of all, the pacing… Doctor Who was conceived and structured as a half-hour serial. You wouldn’t take eight episodes of the original Dark Shadows, splice them together and call it a movie — but that’s exactly what the Beeb did to Doctor Who.

When something is presented to you as a movie, you expect it to live up to movie standards. Unlike the modern series, “classic” Doctor Who doesn’t.

It wasn’t until well into the advent of Home Video that I had the opportunity to see the show in its (immensely more digestible) original format — and because the Home Video releases have been so expensive, the greater bulk of Doctor Who is still only known to me from that one viewing, thirty years ago, of those wretched “movie versions.”

One exception to this was the fan-made “reconstructions” of destroyed or missing episodes. This era (happening something like fifteen years ago when VHS was still the standard for Home Video) didn’t last long, but was fun while it lasted.

Shortly after the discovery that audio recordings and still photographs existed for all of the episodes that the BBC had foolishly destroyed, a number of die-hard Doctor Who fans, working separately and together, assembled new video presentations combining the stills and audio with every scrap of existing footage, some of which was gleaned from sources as interesting as the Australian TV censors! These same fans then put together a free distribution network for their product. You could send them a bunch of blank VHS tapes, and they would dupe their reconstructions onto your tapes and send them back to you.

This wasn’t just a way to see whole swaths of Doctor Who that I had never seen before. It appealed to me because it was also pure “Our Gang” industry, just a bunch of amateurs doing something for the love of it, to please themselves and benefit other fans.

Broadband internet and easy DVD creation should have helped these projects; instead they seem to have had the opposite effect. Last year when I tried to replace my VHS copies of the reconstructions, I found that I couldn’t. Perhaps the BBC had stepped in and squashed the effort — this wouldn’t be surprising. Regardless of the reasons, though, the reconstructions suddenly became lost to me again.

That’s one of the things that changes right now.

For the first time ever, I get to watch full seasons of the original series in its intended form. Taken in this way, the show is deeper; it sinks in to your subconscious and becomes a part of your life. For me, the William Hartnell years were little more than a blur on my radar: now, nearing the middle of his second season (I started watching with Season Two and plan to view a full season for each Doctor, one after the other, before going back to Hartnell), I see the depth of his performance: there is mystery here, and also a good deal of regret and sadness. The effects and settings sometimes do require you to mentally step back in time, but this is not a bad thing. The stories, though still leisurely by today’s standards, are better paced and have more impact when taken in twenty-four minute installments. And especially if you can successfully travel mentally in time back to 1964, the level of imagination and inventiveness that went into the show can be breathtaking. Was there anything else like it, anything else so imaginative in its day? No, and not even close. It’s easy for someone used to the technical aptitude of the modern Doctor Who series to go back and declare that these early shows look primitive: they do. But in 1963, where else could you find fantasy ideas so eloquent, or a character so rich? Not anywhere on television, certainly. Not anywhere in Time or Space.